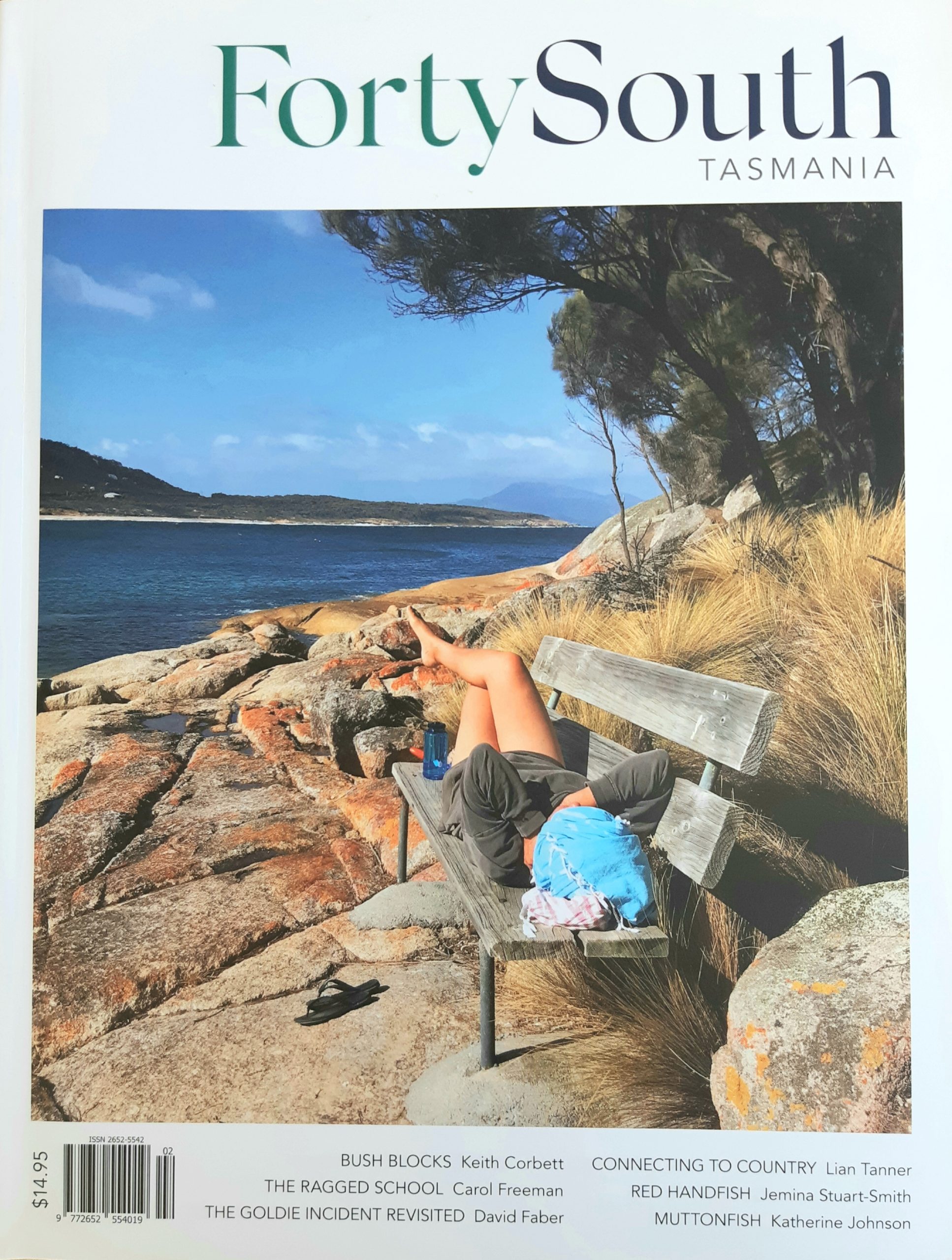 To read those that appear in Forty South online magazine, look under Environment and History here

From the editor’s desk: “Carol Freeman’s evocative telling of the story of the Ragged School, which was part institution and part sanctuary for the poor children of early Hobart Town, is both eye-opening and heart-warming”

“The Suspension of Ordinary” no 89

“Imagine a workplace where egos are left at the door, where everyone works together and is constantly excited by their assignments, where projects are so varied and challenging that those who contribute to them are never bored, or overwhelmed” . . . . this is Liminal Design Studio, Hobart.

“I’m sitting on a bench in a large room with deep blue walls. The colour reminds me of a Tasmanian sky at dusk, a sky that would have been noticed by countless Aboriginal people over thousands of years, perhaps when they gathered to eat what is now considered gourmet food ─ oysters and abalone fresh from the sea, wild cherries, or char-grilled wallaby”

“Hobart is abuzz with activity. At the corner of Campbell and Collins Streets, on the fringe of the CBD, a site in the old Wapping district is being excavated. An archaeologist chips away at brick footings and crumbling soil on the long-vacant block that is soon to be the University of Tasmanian’s Academy of Creative Industries and Performing Arts”

From the editor’s desk: “Carol Freeman knows a great deal about Tasmanian nature and has written compellingly about it in Tasmania 40° South issues past. Dr Jules Freeman, Carol Freeman’s son, is a molecular geneticist who studies blue gums (Eucalyptus globulus). When they get together to prepare a feature story on this most Tasmanian of trees, one doesn’t hesitate to publish it”

From the editor’s desk: “I am delighted to publish [a refutation of our feature article in issue 82] as our lead feature in this issue. It is not the romantic version of the thylacine story that some of us want to believe. It is, I say with icy certainty, the real one”

“Voices from the Theatre” no 80

“Sound is cardinal in theatre. Whether it’s a speech, music or dance, the murmuring of an audience or the enthusiasm of its clapping, or the thunder of complete silence, sound is an essential part of a performance experience “

“Searching for objects is about curiosity, seeking, finding and conserving things for the future. ‘Collecting is rescuing something,’ says Peter Clayfield” about his collection of Thylacine (Tasmanian ‘tiger’) memorabilia.