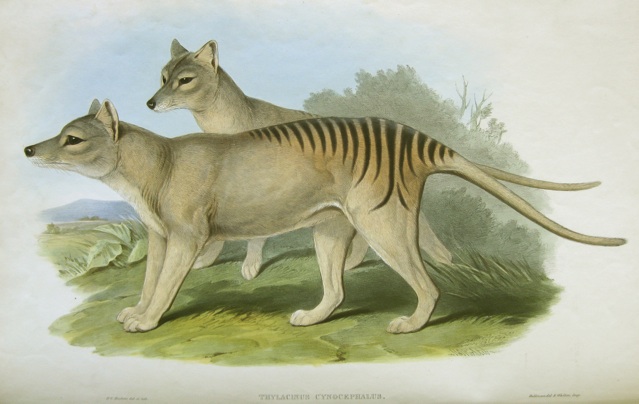 Thylacinus cynocephalus in John Gould, The Mammals of Australia, 1851. Lithograph

The Thylacine Comes to Britain

The first thylacines to be seen in Europe arrived in London in May 1850. In a letter to D. W. Mitchell, the secretary of the Zoological Society of London, settler and naturalist Ronald Gunn who had sent the animals from Launceston, Tasmania, stated that after six months in confinement the female of the pair had “become sufficiently tame to permit its head to be scratched”. But immediately before the letter in the Proceedings, the thylacine is defined as “one of the rarest and most difficult forms… of Marsupials”. The ‘difficulty’ probably refers to the species’ reputed sheep-killing and ‘savagery’. This comment would have generated curiosity and great interest in the animals at the zoo in Regent’s Park. As director of the Zoo, Mitchell had introduced a system referred to as ‘starring’, where there was always at least one new interesting animal exhibit on display. This practice included press coverage with animals presented “for their scientific or political significance, as evidence of British ability to subdue exotic territories and convert their products to useful purposes” (Ritvo 1987).

The lithographs of thylacines by H. C. Richter, one of Gould’s employees, are stylised representations in common with the other illustrations in Gould’s book. The full, black eyes give the foremost animal of the pair a soft, deer-like expression; but in the second figure and in the large head-view, their almond shape is accentuated and surrounded by a much lighter wash and darker shaded lines that focus attention on the eye. These slanted eyes would have made the animal appear exotic, mysterious and savage to a nineteenth century European audience. Such a reading is contained in a book called Excelsior: Helps to Progress in Religion, Science and Literature published in 1855, where the text mentions Gould’s “great work” and notes that the head of the male is shown “in such a point of view as to exhibit the applicability of one of the names applied to it by the colonists, that of ‘zebra-wolf'”. Excelsior refers not only to the exoticism of the zebra, but also to the savage connotations in the ‘wolf’ part of the name. More recently, zoologist Eric Guiler suggests a similar reading of the male head that accompanies the lithograph of the pair when he says that the eyes exhibit “a somewhat mysterious cruelty”.

The changes made to the image are clearly apparent from comparing the preparatory drawing in pencil and watercolour by Henry Richter with the finished lithograph he also made. The drawing is a softer, less extreme version of the figures. Both thylacines have a benign appearance, with the second figure only dimly delineated and the plant mentioned earlier barely discernible. The only hint of ambiguity is the inscription “Tasmanian Wolf— from a female” on the lower right hand corner. This information also indicates that the second figure has been adapted from a drawing of the female animal only. Gunn described the female as tame enough to be touched and commented that the newly caught male “seems to be on the best of terms” with the female, although “not yet so familiar with the presence of man”, which is perhaps why only the female is mentioned on Richter’s drawing. In the lithograph the eyes of both figures have been outlined and accentuated and, particularly in the head study and the second animal of the pair, have been given an upward tilt at the outer edge. This difference is significant, especially as the second figure and the “figure of the head represent[ing] that of the male of the natural size” mentioned in the text, are merely imaginative visualisations of the female, rather than careful drawings of the male model. Oliver Goldsmith’s An History of the Earth and Animated Nature, of which there were twenty editions between 1774 and 1876, contends that “the feature that principally distinguishes the visage of the wolf from that of the dog, is the eye, which opens slantingly upwards… whereas in the dog, it opens more at right angles with the nose, as in man”. The shape of the eyes in the lithograph in Gould’s work, then, would have been instantly recognised as connoting savagery in its association with the wolf and decidedly other in relation to domesticated animals, like the dog, and to ‘man’— in particular, Western man.

The illustrations in Gould’s lavish book have been admired for the elegance of their figures, the neatness of their forms, and the competence of their production. But there is something else happening in this picture of thylacines. Although the vegetation in the background replaces the wire of the cage at the Zoological Gardens, in both the drawing and the print the figures’ gaze is directed toward something outside the frame of the enclosure/picture. Here is an indelible trace of the two animals that arrived at Regent’s Park Zoo in 1850 after the long sea journey from Launceston—the questing eyes and noses of the figures in the illustration are focused beyond the invisible bars. The models for this image were most likely looking at humans looking at them in the zoo. In his essay “Why Look at Animals?” social critic John Berger writes, “the fact that [animals] can observe us has lost all significance. They are the objects of our ever-extending knowledge”. This image shows, however, that animals were not necessarily the impassive objects of various human gazes. The models for this image were looking back.