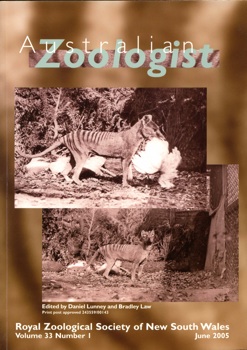 Is This Picture Worth a Thousand Words?

In 2005 Carol’s pioneering lead article in Australian Zoologist broke the story of a hoax photograph of the thylacine taken by Australian amateur naturalist, Harry Burrell, and first published in 1921.
Australian-Zoologist 33 (1).

In 1921 a photograph of a thylacine Thylacinus cynocephalus carrying a chicken in its mouth appeared in The Australian Museum Magazine with the caption “copyright photo from life – H. Burrell”. In 1926, A.S. Le Souef and Harry Burrell used the same photograph to illustrate the entry for the thylacine in The Wild Animals of Australasia. Robert Paddle (2000) considers the picture to be one of the chief causes of a “blossoming of the construction that the thylacine was a significant poultry predator” and notes that the photograph has been used in many published works. However, a former associate of Burrell suggests that the figure in the photograph is not a live animal, but a mounted specimen placed against a “bush background”. With the assistance of digital imaging programs, a close analysis of the glass plate negative of this photograph is undertaken to determine the veracity of the claim. This article concludes that the figure in the photograph is indeed a mounted specimen. Certain circumstantial evidence connected with the historical and textual contexts in which the image was produced and published is also discussed. As one of the last in a series of negative representations of the thylacine in zoological works, the photograph’s prolonged uncritical reception demonstrates the deceptive potential of photography and suggests that we see what we are conditioned to see.